This week, a slightly strange thing has happened, but before I go into what and why it's bad, let me explain the backgrounding.

Archie Comics caused a bit of a storm when they introduced a new character in recent years - that character was called Kevin Keller, and he holds the honour of being the first official openly-gay character in the Archie series. He's a military brat - his father served and he hopes to serve as well - and neatly fits into the "sporty" archetype. He serves many, many uses in the comics. He represents homosexuality, he represents pride, and he can be used to dispel myths. As I believe I alluded to in my review of Betty & Veronica: In Each Other's Shoes, he was used to dispel the idea that all homosexual males are interested in fashion design. To us, as adults, that might be obvious - but Archie is often aimed at children and teens, and as such it's important in helping challenge stereotypes and negative representations.

After a successful integration into the cast, Kevin was granted an on-going series, further bolstering the range of titles whilst his initial appearance was nominated for a GLAAD media award (I'm not 100% sure on what exactly was nominated, I assume it's the two issues of Veronica and the four-issue limited mini-series that have been collected into a single volume).

In January 2012, an issue of Life With Archie released (Issue #16) in which Kevin Keller would be married to his parter after returning from serving in the US army. The Life With Archie series takes place some years after the main group of series (Archie, Betty & Veronica, et al) when all of the characters are grown up. Each issue is split into two halves - each half representing one of two paths Archie took in his life. One path is where he marries Betty, the second is where he marries Veronica. In the issue in question, Kevin Keller was getting married regardless of whom Archie chose, but the particulars of how he met his partner differ. 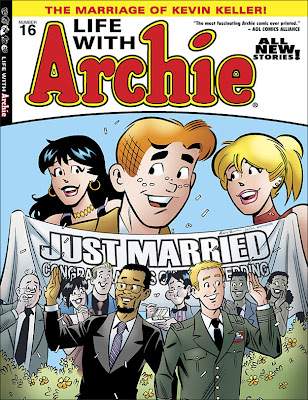 So, this brings us to now. A Christian group by the name of  (the) American Family Association have targeted Toys 'R' Us, the multi-national toy store, over their sale of Life With Archie. They view it as wrong to push the "gay agenda" onto young children and that it is "unnecessary" to confront children (and parents) with the topic of same-sex marriage.

I disagree with them, and strongly.
- Firstly, Life With Archie - along with most Archie Comics series - is aimed more for those near or in their lower teens, as well as the adults who continue to follow the capers of Archie and the gang. It's a darker comic in general with the stakes raised to a level a child likely wouldn't fully grasp.
- Secondly, it's hypocritical. I would accuse (the) American Family Association of pushing the "straight agenda" on to those who are of variant sexualities. Why is their sexuality more important and more "correct" than that of someone else? Why should Archie Comics be censored because people are afraid of what's different? You can't accuse someone else of pushing an agenda in the very same breath that you push your own.
- Thirdly, Archie Comics are not an agenda-pushing company. They are representative of an idealised American culture, and one where you are welcome regardless of your race, gender or sexuality. It is a little on the conservative side with little to no depictions of drink, drugs and so forth, but is positive in all respects.
- Fourthly, what's more damaging - a gay character in a comic, or the sexism and segregation perpetuated by toy manufacturers? A gay character is evil, but it's fine to tell boys they can shoot each other with toy guns and look up to those who exert violence on their enemies, and it's fine to give an eight year old girl a baby doll that requires parenting, or an over-sexualised female figure?

In my personal experience, Kevin is a positive character in every respect. It doesn't matter that he's gay but he's proud of who he is, and he doesn't hide from it. He's arguably a ray of light in what is a dark time. Archie Comics are showing the world that you can have gay characters shown in a positive way and that they are no different to... anyone else. If Kevin has inspired just one gay person to come out and be proud of who they are, just one, then I believe that is an amazing thing. If he's saved another from taking an attempt on his life, that's even better.

I felt that Jon Goldwater, the CEO of Archie Comics, summed it up very well in his response to Comic Book Resources:
“We stand by Life with Archie #16. As I’ve said before, Riverdale is a safe, welcoming place that does not judge anyone. It’s an idealized version of America that will hopefully become reality someday.
“We’re sorry the American Family Association/OneMillionMoms.com feels so negatively about our product, but they have every right to their opinion, just like we have the right to stand by ours. Kevin Keller will forever be a part of Riverdale, and he will live a happy, long life free of prejudice, hate and narrow-minded people.”

The last sentence is an absolute zinger, and sums it up perfectly. Kevin is here to stay, and I hope he becomes as irreplaceable as Jughead, Reggie, Veronica, Betty and even Archie himself.


I will ask this of everyone who reads my blog. If you support Archie Comics and their inclusion of Kevin Keller, please find a way to support them. Whether you download the Archie Comics app and buy Life With Archie #16, whether you buy the hardcover Kevin Keller collection or even buy his on-going, I urge you to support them in some way. If you're in the US and you visit Toys 'R' Us, please pick up a copy of any recent Life With Archie comics (particularly #16), and make it known somehow that you support them selling it.

This isn't just one comic we're talking about. We're talking about an attack on the way people live their lives, and a group of people contributing to the hiding of variant sexualities. Young teens take their lives on a daily basis over how they're treated over their sexualities, they live in fear of not being accepted. Help stop that, help contribute to the fight against homophobia and to the fight to see those who are different be seen as nothing other than normal.
Posted by Kathryn at 5:18 PM No comments:

Yes, I've been somewhat silent lately, at least in terms of Tumblin' and Bloggin', and there's a few reasons. First of all, I've just not had much to say. I've had a fairly quiet period of on/off reading, and whilst I've already got two 2012 releases (Thief's Covenant and Shadow's Master) read, I've not really had the energy to review them.

As for reviewing itself - I suppose I'm officially retired from it now, at least in terms of my positions with SFFWorld and Speculative Book Review. I burnt out pretty much as soon as my resignations went into effect, and it's still there over a month later. I do still have one more review to do in the coming month or so, which will be J.A. Pitts' Forged In Fire, but that depends on whether I decide to re-read the previous books.

Looking forward to April, though - B.P.R.D.:  Plague of Frogs Omnibus #3, The Wind Through The Keyhole (The Dark Tower #8/4.5) and I'll also be receiving (in lieu of chocolates and other Easter-related overpriced tat) the eighth The Dark Tower graphic novel, The Battle of Tull.

So, largely I've just been recharging. Reading for pleasure is quite fun but with too many late nights, personal stress and so forth, I've just not been able to really get into anything as much as I'd like to. This weekend, I've been re-reading the B.P.R.D. series. Well, to be precise, I'm re-reading the first two omnibus releases of the Plague of Frogs arc in preparation for the third volume in April. It's quite a nice change from a novel.
Posted by Kathryn at 11:07 PM No comments: