Widdershins, Widdershins, Widdershins... Young woman, master thief, sole follower of a minor god and quite the snarky little thing. She's an interesting and compelling protagonist, and a pleasure to read about, and after thoroughly enjoying her début in Thief's Covenant, I was champing at the bit to read her next adventure. 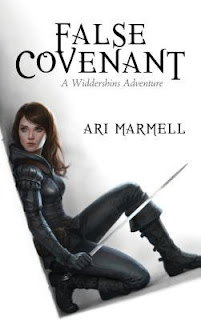 So why am I a little disappointed with False Covenant, the latest YA novel from Pyr Books?

It's not so much a bad book as it is awkward. I didn't find the plot itself that interesting, but I did enjoy the characters, though that's often rarely enough to keep you going through a novel.

I found Marmell's writing style to not sit too well with me (something False Covenant shares with his earlier The Goblin Corps, albeit for different reasons), because it doesn't feel all that natural. The narrator peppers the text with colloquialisms, casual talk and moments of stretching (if not outright breaking) of the fourth wall. In my personal opinion, this really only works if the story is told by the protagonist or if you're Sir Terry Pratchett (and even then it seems like he gets it wrong almost as much as he gets it right). At other times I struggled a little with it for no discernible reason. Yeah, that's an apt comparison. Marmell's Widdershins books, to me, are like Sir Pratchett's Discworld books. Really interesting characters, some good humour (though nothing that made me laugh, sadly), but the plot leaves something to be desired.

With regards to the villain I just didn't really find the villain all that fun nor the confrontations with him to flow too well in my head. There were a few scenes in which we saw how truly merciless and vile he was, and some of them should have been quite distressing, yet I never particularly felt anything during them beyond a "oh, that's not very nice" type reaction. That said, the way he was explained brought up some very interesting ideas with regards to belief, which I found intriguing.

The way characters interact is definitely a strength, however. The dialogue mostly felt natural and genuine - characters were ignored in conversations, some spoke over others and so forth. Many of the thoughts and feelings felt right (within the context of the book), and even the supporting villains (it's hard to explain what they are without spoiling anything) had logic and sense behind their actions that allowed you to see what they were trying to do, but also why they reacted like they did to developments in the plot. It's due to moments like that and scenes involving 'Shins and other major characters (Robin, Renard, etc) that really made this book enjoyable for me. The book could just be 'Shins walking around talking to other characters and I'd enjoy it.

Marmell also tries his hand at romance, and I just didn't really care for it, especially as it ends up being a love trapezoid or something along those lines. Two of the people involved - YES! It made perfect sense (and for one of them it was OMG SQUEEE <3 CUTE CUTE CUTE!), but the third person? Oh dear. No, I just didn't buy it for a single moment, nor how it progressed, let alone how it was dealt with at the end as I had no emotional attachment to that character nor the romantic story involved. If Craeosh and... um... the troll lady from The Goblin Corps had ended up having feral naughty times in a bush in the middle of TGC, I would have found that more convincing (well, come on, there was a lot of sexual tension between them).

In conclusion, I'd say False Covenant is a somewhat enjoyable book with numerous issues. It's never bad, but I was gripped for all the wrong reasons. I didn't much care how the plot turned out, but I wanted those all-too-few moments of genuine character interaction - largely between 'shins and other characters, particularly her best friend Robin (total crush on her now, despite the age gap). Looking at Goodreads, it appears I'm in the minority on this, and perhaps I am. I would put this, in terms of enjoyment, next to books like Jim C. Hines' Red Hood's Revenge and Sir Pratchett's I Shall Wear Midnight - they're not bad on any real level, they just didn't do a lot for me at the time I read them.

I would, however, still urge people to check out the Widdershins books. She's a great character, and one I want to see much more of in the future. Marmell has a real flair for writing female characters, and I would hope that he continues to use that to his advantage in his future books. I'd also ask that he adds a Dramatis Personae list to the start of each book - it's easy to get names confused!

Rating: Jade crying (for a character who I will not name) 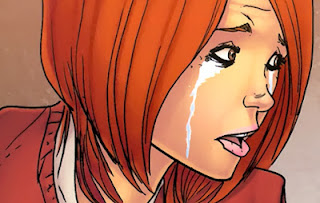 Posted by Kathryn at 9:20 AM No comments:

Today is Free Comic Book Day! A day of free comics! Of queueing in a small shop with dozens of people, fighting over the same small selection of titles, few of which they're truly interested in and are taking merely because they're free - hey, I do it too!
So here's what I got today! 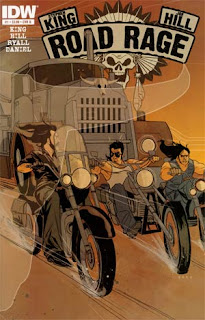 Road Rage #1 (Phil Noto variant)
What can I say? Stephen King writing with Joe Hill, his son. Those names alone sold me on it, and once I found out Phil Noto had done a variant, I just had to grab it. 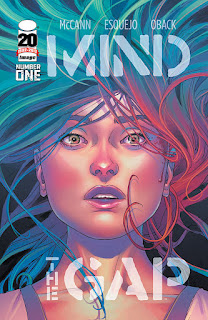 Mind the Gap #1 (Cover A)
I was quite critical of Mind the Gap when I read the prologue a few months ago, but thankfully the first issue puts some of those worries to rest. Like Morning Glories (the series Esquejo has done numerous covers for), it looks as though it'll be a series that needs a few passes before it fully begins to make sense.


I'll confess that the series hadn't left my mind since that preview, so to finally get it is quite welcome. 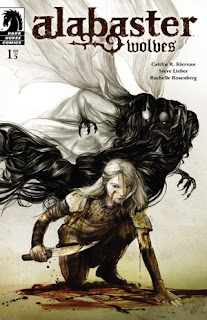 Alabaster: Wolves #1
Alabaster: Wolves appeared on my radar with quite the bang. I've little idea what it's about or what it's like beyond a fantasy series, but the attachment of Kiernan's name (I've not read her work before but her name does appear numerous times in various places) and the push from Rob Bedford of SFFWorld means I now have a copy. 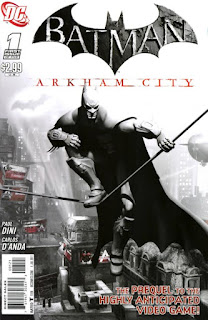 Batman: Arkham City #1
It was 99p in GAME, yet I've not even started it and I'm disappointed. How thin is this comic? Does it have just three pages or something?!


Ahem. I liked the first game, but I was really just swayed by the price on this one.

Missed out on getting a number of issues I wanted. B.P.R.D. Hell on Earth: The Pickens County Horror #1 wasn't in stock so I passed on #2 as well, Avenging Spider-Man #7 has been delayed a week, so I couldn't get that, and two other issues I wanted, Saga #1 and New Avengers #59, also weren't around so I'll get the former in trade and the latter digitally this weekend through the Comixology sale. Maybe. I was also thinking about Epic Kill #1 but I passed for reasons I still don't know. I should probably have bought it instead of Arkham City #1.

Free
Well, it's not Free Comic Book Day if I don't get any of the free comics, is it? Here's the list of available comics, and I'll list the ones I got. Sadly, a number that I wanted weren't available, and those I'll list separately.

Missed:
The Intrinsic;
DC Nation/Superman Family (it was there, I forgot to pick it up! Arse!);
Jurassic Strike Force 5.

I didn't do too badly, all things considered. I also picked up a Vertigo sampler, but it wasn't a FCBD title so I'm not counting it in the list. I got the majority of the ones I really cared about, and many I don't. Atomic Robo, Aspen and Star Wars are pretty much staples of my FCBD haul regardless of the year, though chances are Atomic Robo is the only one I'll get to quickly.