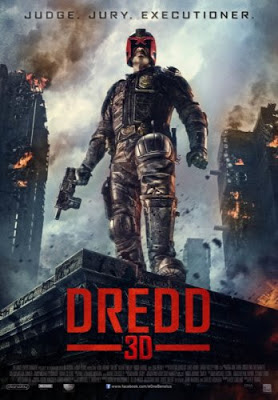 In 2012, we finally saw the release of the second film based on the 2000AD property Judge Dredd, aptly titled 'Dredd'. In interviews and marketing, there was a clear attempt to distance this new film from the notorious 1995 Judge Dredd, which famously starred Sylvester Stallone as Judge Joe Dredd. I, strangely, have a bit of a soft spot for that film, even if it isn't particularly great and crosses a few lines that it shouldn't have (namely Dredd removing his helmet, and for long periods of time too).

With Dredd, we see Karl Urban take up the mantle of Old Stony Face, supported by Olivia Thirlby as Judge Cassandra Anderson, as they get trapped in a Block War with the leader of the Ma-Ma Clan (called Ma-Ma, played by Lena Headey). Dredd and Anderson are tasked with taking Ma-Ma and her clan down, and along with it the production and distribution of a drug called 'Slo-Mo', in turn making the Peach Trees block safer for its hundreds (if not thousands) of inhabitants.

The film uses slow-motion techniques fairly frequently, particularly with regard to the 'Slo-Mo' drug which is said to make time seem as if it's passing at 1% of its usual speed (so a second is more like 100 seconds), though for obvious reasons this isn't accurately represented in the film. Whilst the effect is visually quite appealing, it quickly becomes overused and focuses more on the ultra-violent sections, themselves being too frequent and too intense to really shock anyone but the most squeamish.

There are a number of scenes which contain unnecessary events, including some forced oral rape (which doesn't exactly happen, but that part of the scene was entirely unnecessary) and the slow-motion crushing of a head, and these are more off-putting than anything else. They add nothing to the film nor the story, and seem to be there for the shock factor. One of the thugs, who is cuffed by Anderson and dragged around for most of the film, refers to Anderson as a 'bitch' in one scene, which is completely unnecessary and frankly a bit tasteless. This film has two strong female characters in the foreground (three if you count the Head Judge), yet it resorts to petty sexism to try and make one of the thugs look more evil.

If there's one thing Dredd does not do right, it lies in its inability to present a consistent and sensible vision of the future. You have these blocks that are 200+ floors high surrounded by much smaller buildings of modern design (although all the roads are magically straight), Lawgivers are wielded alongside weapons like MP5s, and old VW vans driving on the roads with the high-tech motorbikes ridden by the judges. The future shown here is inconsistent and contradictory, there's many examples of progression alongside stagnation, yet these never make sense and, in my opinion, take away from my ability to become immersed within the film.

Whilst the film almost completely ignores the tone and design of the comics, it still acknowledges its roots with a few nods. This includes a Fatty surrounded by food, a punk jacket with 'Drokk' written on it and 'No Muties' graffiti on a wall in the Block, as well as verbal references to concepts like 'Iso-Cubes' and phrases like 'perp' and 'juve'. It's then disappointing that the variety of expletives from the comics make no appearance, instead swear words from our time (most notably the word 'Fuck') are used with reckless abandon. Judge Anderson also doesn't have her quick-witted attitude from the comics, nor is Dredd as ruthless or uncompromising. Their partnership works in this film, but it's not the Dredd and Anderson we've followed for over twenty years.

I don't want to hate Dredd. It's an important film for British sci-fi and British comics, an industry that's hanging on by its fingertips as many of our creators are lured to work in American comics. But in its attempts to distance itself from the Stallone film and be a more serious film, it loses sight of what makes Judge Dredd, well, Judge Dredd. It has none of the satire, none of the dark humour, nothing. It feels like a faintly sci-fi themed action flick with a fetish for over-indulgent cinematography tricks and extreme violence. It's not even exciting!

If nothing else, buy and watch Dredd because we need to support the British film and comic industries. It needs the boost in visibility, and that's why Dredd needs to break even (which it didn't at the box office due to a lacklustre US performance). It's not great, but it is watchable, even if you have to close your eyes during the more extreme moments. Long-time 2000AD fans might be disappointed, but for those with little-to-no experience of the comics, it might just be an enjoyable watch.
Posted by Kathryn at 9:59 PM 2 comments: