REVIEW - Songs of the Earth by Elspeth Cooper

Songs of the Earth is the Morningstar-nominated debut from Elspeth Cooper, and also the first in her The Wild Hunt series (recently announced to have evolved from a trilogy to a quartet/quadrilogy). In this book, we spend most of our time following Gair, a young man who narrowly escapes being burned as a witch, and as he flees he finds a man who will change the course of his life forever, a man who challenges everything the doctrine of his faith would have him believe. 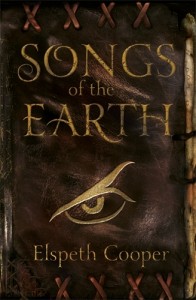 To start with, Songs is unapologetically traditional in most ways. Young male protagonist who's one of the strongest in recent times at what he does, fairly typical European-esque setting and hints at non-human sentient races (e.g. the sea-elves towards the end). However, some of the traditional aspects are subverted in a few ways such as the post-mediaeval setting (that said, it's not far beyond one). The setting is fairly interesting despite being slightly conventional, but even then it's just a skeleton that Cooper fleshes out with an incredibly well-written journey.

The journey, all roughly 467 pages of it, is very enjoyable. Cooper has a clear, calm writing voice that rarely confused me but at the same time flowed at a fairly high rate. In this regard, Songs is without a doubt a quick and easy read that young-adult and adult readers alike can enjoy without any major issues. She has a natural ability to write believable characters with unique voices and behaviours, and the ways certain characters interacted (particularly Gair with Alderan and, later, Aysha and Tanith) was something I found very enjoyable. Characters didn't talk at each other, they talked to each other.

Despite some seemingly generic aspects, there is some interesting use of magic and parallel worlds in this book. The way both of her worlds (Gair's and a sort-of "shadow world") were linked was definitely intriguing and, whilst a little underplayed due to the focus of the novel, will hopefully be explored in later volumes to great effect.

I can't think of anything that was bad about this read, although those looking for a magic system with a musical aspect may be a little disappointed by the misnomer in the title as it's not a 'straight' magical music system as could be found in, say, L.E. Modesitt, Jr.'s Spellsong Cycle, but is more metaphorically musical from what I understood from its explanations and use. Other than that, there was nothing that stood out to me as a 'bad' aspect or as something that detracted from the novel.

If I had to give Songs of the Earth a rating, it would be four stars out of five, and a solid four at that. I'm not sure anything could have pushed this to a five, at least not in the long-term, but perhaps later volumes will manage to change this.. Songs is, from what I've read so far, one of the best books to have been released in 2011, and Elspeth Cooper easily shows herself able to stand amongst the giants of the genre with this debut.
Posted by Kathryn at 10:38 PM