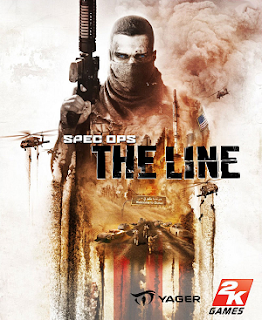 I'm doing a mini-review of this game because, well, it's just impossible to do an accurate review, and for a good reason. Spec Ops: The Line is a deep game, especially for its sub-six hour length and third-person shooter style. Set in a sand-covered Dubai, you play as Captain Martin Walker, the leader of a small team of Delta Force operatives. Your mission quickly changes from the brief, escalating into what is easily one of the best-written campaigns of any modern shooter.

Now, that does sound a little bit like saying being punched in the stomach is preferable to being stabbed in the eye, but Spec Ops: The Line shows that the shooter genre is a perfectly capable and valid vehicle for a powerful, complex story that delves into the human psyche and the morality and ethics of warfare.

What is also surprising is that, removed from the story, the game itself holds up rather well. Whilst it sometimes isn't the prettiest, and this can impact some sections of the game, it is richly detailed, and the combat mechanics, mostly, work as they should. I found switching weapon and grenade types to be a little confusing at first, and the cover mechanics don't quite work as smoothly as they should (which can make some sections harder than they should be), but otherwise it is an expertly crafted game. The audio design is also almost entirely excellent and worth noting, particularly the choice of licensed tracks. I was surprised to hear Mogwai's Glasgow Mega-Snake play during one high-adrenaline section, though the effect was marred a little by no effort to blend the repeats into each other (meaning the song played out, then started again).

I don't really want to talk more about the story, I feel I've said too much as it is. The story needs to be experienced, played through and reacted to. Reading it in a review or even on blogs just doesn't do it any justice, and will even take away from one's own experience.

Spec Ops: The Line is a game I highly recommend. It is an excellent deconstruction of the war genre, and a brilliant game in its own right. Whilst it will normally take no more than six hours to complete, those few short hours are amongst the best you will ever experience in a game of its type.
Posted by Kathryn at 10:32 PM