REVIEW - We Can Fix It by Jess Fink 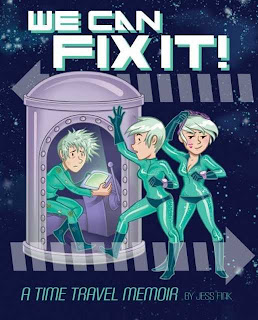 Jess Fink is one of those names that keeps cropping up in comics circles, yet whilst she's never worked on mainstream comics (to my knowledge), her sexually-charged comics and approach to sexualities has seen her become a prominent figure in independent comics and her work is frequently discussed on major comics sites. We Can Fix It is a semi-autobiographical comic, and it has surprising similarities to the hourly comics fad which saw releases like Marc Ellerby's Ellerbisms and The Everyday by Adam Cadwell (obligatory Great Beast plug now over).

We're shown various parts of Fink's life via a jumpsuit-clad futuristic version of herself, as she attempts to correct her mistakes in the past in order to better herself as a person. It's also the story of a young woman wrestling with her sexuality, her identity and the world around her. It's about her trying to account for the mistakes she's made in the past, but also the consequences of trying to correct them.

There is a surprising honesty to this comic, too, with Fink not shying away from details of her sexual life and her use of drugs, or even some rather traumatic events involving her family. This honesty gives an emotional link, and if you don't agree with some of what Fink may have done in the past, you can't help but identify with the situations she's in on some level. Amongst the crude jokes, there are deep messages that we can all learn from and they easily push this comic into the realms of excellence.

A highly recommended read. We Can Fix It is available digitally via ComiXology, and is also available in paperback. Both editions are published by Top Shelf.
Posted by Kathryn at 10:19 AM