THOUGHTS - The Hobbit: The Desolation of Smaug (Extended Edition)

Warning: I WILL be discussing spoilers.

This time a year ago, I sat down and watched the first third of The Hobbit's film adaptation, An Unexpected Journey, in its extended form. On the whole I enjoyed it, whilst thinking it should have been done a little differently. A month and a bit later, I was sat in the cinema waiting for the first showing of part two, The Desolation of Smaug, to begin. Three hours later I walked out thinking it was an excellent film. Today I watched the Extended Edition of the second part, a day after its release in the UK, and I have to confess my feelings have changed.

And not for the better. 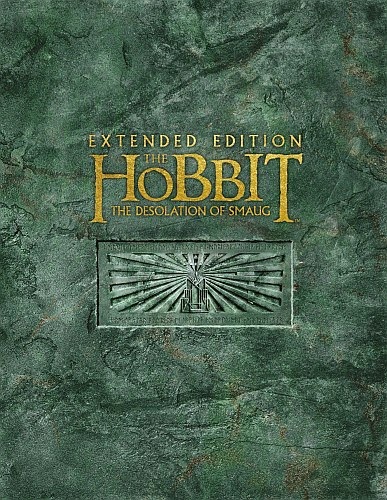 Before I start to air my issues, I would like to state first and foremost that I think doing The Hobbit as a trilogy with stronger ties to The Lord of the Rings is an excellent idea, and one I wholly support. A number of the changes also work well, such as the creation of Tauriel, even if it has upset some purists. I'm not a purist, and if there's one positive here that I will wax lyrical about, it's Tauriel.

My issues with The Desolation of Smaug (DoS from here) are a mix of what's given to us in the Extended Edition and noticing core flaws within the original film. A lot of the scenes that were added tend towards the pointless, if not the outright ridiculous, and I suspect they're partially to play for the sudden jump towards a 15 rating (from a 12 in its theatrical cut), making this the most adult of the films by its classification - the lowest being The Fellowship of the Ring at a PG. This is strange because there's nothing particularly objectionable bar some addition of strong language, the violence is exactly the same.

DoS does continue with the faults of the first part in that it has some exaggerated design within a sober world. The look of the Dwarves becomes less noticeable as the film goes on - though I still maintain that the designs are pretty terrible - but the looks of characters such as  The Master of Laketown and Alfrid (The Master's lackey) all stand out as being overly exaggerated. They would look fine if this was an animated film or a comedy, but to see such incongruous designs against relatively sensible ones makes them stand out all the more. I'd even argue that The Master of Laketown, the interior of his house and Alfrid all look as if they'd been cut out of an abandoned comedy show or film and spliced into The Hobbit - they stand out THAT much. The tone with these characters also doesn't fit in, if anything it's even less bearable than The Goblin King's Disney Villain song from the first film.

The CGI also falls flat, with some of the scenes obviously being rendered with 3D in mind, leaving a couple of brief sections as either disorienting or a knock on the fourth wall. For all of WETA's expertise and brilliance, all too many of the CGI scenes look absolutely dreadful. One that sticks in my mind is of Legolas racing out of Laketown on his horse, and I thought it looked good... for a video game. Indeed, it had the same quality to me as the CGI one would find in a video game (and perhaps then, of the last generation) and looked just as natural. We're also treated to Bombur as a rolling ball of doom, and it speaks for a love of ignoring physics and mass (Bombur is basically a walking violation throughout the film, including a scene at the start when he runs) that runs through the film, culminating in the mind-bogglingly bad forge sequence - where the laws of pretty much everything are ignored, including the random generation of literal tons of molten gold to fill the make-shift pool that covers Smaug.

The tricks that don't necessarily (or exclusively) rely on CGI can also be bad. We all remember the scene in Helm's Deep where Legolas slides down the stairs on a shield. It looked pretty good, albeit implausible, right? Well, this time he does it with a goblin (it's CGI) and it's terrible. Sliding does occur in other places too, with a number of scenes involving characters sliding down slopes on flat feet - Gandalf does it once or twice, Bilbo does too - and it's as if they have a tiny bag of tricks that they have to reuse. Even many of the action sequences that blend CGI and live action look extremely unnatural with an almost jarring effect. Whilst less pronounced than it was on a 4k screen at the cinema, the first-person camera during the barrel escape sequence is still of lower quality than the other footage and it comes across as a little pixellated, though I suspect many won't notice.

There are only a couple of new scenes in the Extended Edition, the majority of the extensions adding dialogue or plotlines, such as Gandalf finding Thorin's father in Dol Guldur, and many of these come across as clumsy (including the bizarre use of a Wilhelm Scream for the death of Thorin's father) or pointless. Very little is added that makes an impact on the story itself, instead revealing things we generally already knew. One new scene - technically an extension - is absolutely obscene, though. The Master of Laketown is interrupted by Alfrid shouting "Bollocks!", and then presenting a plate of cooked testicles to him. We are then treated to The Master eating these testicles in a disgusting fashion (I suspect this is why the film got bumped up to a 15) as they discuss how they can stop Bard through corrupt lawmaking.

In truth, I don't think there's a single reason to go for the Extended Edition over the standard, at least for this film. You spare yourself almost half an hour of pointless and/or terrible scenes, many of which should have stayed cut simply because they're beyond poor. I still think The Desolation of Smaug in its theatrical form is a better film than An Unexpected Journey, but upon rewatching I noticed more flaws than I wish I had, and it's made me think less of it than I had done previously. I'm still looking forward to the final part, The Battle of the Five Armies, next month, but not as much as I thought I would.
Posted by Kathryn at 4:02 PM