Harry Potter Reading Challenge #5 - The Order of the Phoenix

And here we are. The longest of the Harry Potter books, and the book I stalled on all those years ago. It starts almost as soon as the fourth book has finished, and whilst it takes place over the same length of time as the rest of the series (i.e. a school year), it's almost four times the length of the first book, and boy - does it feel it! Of course, it goes without saying that there are spoilers ahead. 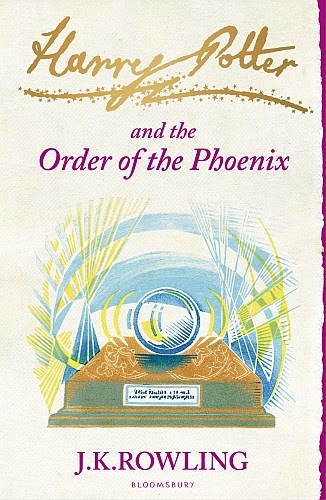 It didn't take long for me to work out why I stalled on this entry. Harry Potter starts off angsty. He continues to be angsty. And then continues some more. We have pages dedicated to Harry helping clean a house. We have pages dedicated to Harry having a whinge and a shout and almost a cry. We have... Eugh. Really. It's basically Harry Has a Bad Day And Cannot Deal With It, and he has the same fault he did for a part of The Goblet of Fire in that he cannot get over his damn pride. Add into this hefty doses of jealousy, feelings of abandonment, teenage angst and so on, and you just end up with something that represents an attempt by Neville Longbottom in potions class.

The book mostly isn't that exciting, and aside from a certain new character, I find very little to like here. It's very formulaic. I felt like the same few actions were being repeated, just in different places and with slightly different outcomes. Harry becomes very insular and self-centered, and it quickly becomes insufferable. Ron also seems to lose some of his charm, and Hermione seems to do almost a three-sixty and end up as stuffy and bossy as she did in the first book. It becomes very hard to care about the main three characters - which is a major issue when they're the protagonists - because they get divided. It's kind of like Rowling took something she said from the last book (and repeats a few times in this one), and sledge-hammered it in. The personality changes are so quick it's surprising the characters don't have whiplash.

It's understandable that the characters would change after the traumatic events of the fourth book - especially Harry - but never is it said to be due to those events, more the situation after. I find this quite problematic because I think Harry should have been put in a position to deal with the events of the last book, and whilst a lot of his frustration is understandable, Rowling never really gives us any reason or way to sympathise - or even empathise - with him. This is not aided by a lot of it just not being mentioned - I found Cedric really only came up in extreme cases, whereas I - personally - think that Cedric's death would have been the most traumatic of Harry's experiences.

I'm not sure Rowling even improved that much. We see her clumsy descriptions continue, with Angelina again having her race mentioned - she's re-introduced as "a tall black girl" at one point - whilst Cho Chang (the most obvious example of a non-white character), nor most of Harry's fellow students, being described in such a manner. It seems odd that Rowling persists in pointing this out for the one or two characters she describes as black, whilst the other non-white characters aren't described in similar ways. Heck, they're not even really described. I don't know if it's just an attempt to show there is diversity at Hogwarts, but it comes across as a little odd.

And yet... the last third of the book - whilst not excellent - does finally pick up. Neville comes into his own, Ginny gets a little more agency, Ron and Hermione take less of the brunt of the story but are still important and do interesting things, and we have a new character called Luna Lovegood (she's in the book for maybe 500 pages) and I have to say she instantly became my new favourite character in the series. It really does speed up towards the end, and the last third of the book flies past, in stark contrast to the sluggish, bloated first two-thirds.

I found the final talk between Dumbledore and Harry both interesting and frustrating to read, at least to start with, but it felt like a good way to transition the story into what it will become in the final two volumes, and it explains various plot points rather clearly and sensibly - although one of them (Harry not being a prefect) seemed to be more a vague attempt to reason something that didn't need reasoning. There's a hundred thousand reasons why Harry could or should not be a prefect, and the explanation we have is... a little weak. It works, but I think it was more Dumbledore trying to be nice rather than a genuine explanation.

Summary: I really don't have much love for this entry in the series. The final third is good but does not, in any way shape or form, redeem the weak showing that is the first two-thirds. I'd rather just read a bullet-point summary of the first 500 or so pages and then top it off with the rest of the book - it'd be a lot simpler and get across the vast majority of the same information without the frustration. Whilst characters like Luna are good and a refreshing addition to the cast, and although characters like Neville finally and wholly break-free of their status as comic relief, it cannot be denied that The Order of the Phoenix is almost self-indulgent, longer and more drawn-out than it ever needed to be. Gone is Rowling's short, sharp, waste-no-time prose from the first book, instead we have a focus on repetition and stating-the-obvious.
Favourite Moment: Basically any with Luna Lovegood, but I'd possibly have to go for her final moment where she's talking with Harry. Such a great look into her character, but also how others treat her.

Improvements From Earlier Book(s): Most of Neville's scenes, the fact Luna exists, more development for Ginny, and (eventually) a decent, firm set-up for the last two books.
Posted by Kathryn at 11:09 AM