REVIEW - Among the Ghosts by Amber Benson 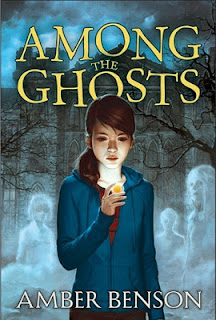 Among the Ghosts' protagonist, Noh, is a girl with a secret. Whilst like many girls her age she's resourceful, intelligent and just a little stubborn, she inherited a gift from her mother – the ability to see and communicate with ghosts. When her father goes away on his latest scientific journey, she is bundled off to her aunt Clara, who is conveniently on holiday as Noh arrives at her house. Taking matters into her own hands after a brief talk with Clara's neighbour, she goes to the only other place she can, which is to her Aunt Sarah who lives and works at the New Newbridge Academy boarding school. As she ventures to the school, Noh detours into the comfort of a graveyard and encounters an older woman there, who gives our young heroine a strange stone. From there onwards, her life begins to change.

We are first introduced to the titular ghosts in the first chapter, which tells a brief story about a boy named Thomas. This very chapter also introduces some ants, which exist as a recurring theme and a page embellishment, and a strange event that happens to Thomas and first hints at what is to come in the book. In the second we learn a little about Noh's childhood and birth, such as the death of her mother just moments after giving birth to Noh, and also what may be in store for her in life.

It's not until the third chapter that we really get into the story. After the first chapter, which is set somewhere chronologically around the time of chapter six, we follow Noh as she arrives at the Academy, and as she discovers what she is and what she can do. Whilst the Academy, especially the unsafe and unused West Wing, is free of children, Noh is certain she keeps seeing some. As is implied by the title, Noh is in fact able to see the ghosts of the Academy. From the chatty Trina to the depressed and sorrowful Henry, Noh interacts with a small party of ghosts and quickly discovers that all is not as it seems.

Benson creates a very well written protagonist with Noh. She's got all the hallmarks of a girl her age, but she never once is a girly-girl, nor a tomboy. She's Noh, and that's all there is to it. The ghost children are also nicely diverse. Trina is very chatty and somewhat girly, Thomas wanted to be a detective, and Nelly plays the perfect part as Trina's best, but rather different, friend. The adult characters, such as Hullie and Aunt Sarah, treat Noh as both a young girl but also an adult, which I felt worked well and seemed fairly typical of how adults can treat children, especially as they're both teachers.

In terms of the writing, I felt Among the Ghosts was on the whole a very well written and thought out book, but by no means perfect. At times I felt as if Benson went beyond the age group this book is aimed at (8-12 years) with both the words she used and the occasional tone or subject of a paragraph. The characters were all nicely written and worked well together, but they also felt real. Towards the end of the book, however, I felt that the story became a little complex and potentially confusing. A big monster is hinted at via brief chapters in the last two thirds of the book, but I felt it was poorly explained and not necessary for the story. There is also a blink-and-you'll-miss-it moment for one of the characters, and if not noticed will leave some readers scratching their heads for a few chapters.

The illustrations drawn by Sina Grace compliment the story well. They're cartoony and stylistic, but easy to match up with the story and they give a good idea of what some characters may look like. I felt they added little to the story, but they break up the text and sometimes tell more than the paragraphs themselves. My gripe with the illustrations is that, as I have noticed in other illustrative books, they can often spoil the story without meaning to. For example, we are told the story of how a child died in the book, and later on we see an illustration of him that takes up about a quarter of a page. My eyes instantly scanned over it and I realised who it was before I'd gotten to him being mentioned, and I felt it took away from that surprise.

Overall, I feel Among the Ghosts is a good read. With Hallowe'en coming up, it would be the perfect gift for the little monster(ess) in your life, although I would encourage parents to give it a read first as it can feel a little dark or gory at times, and they may not wish to upset their child. It's a largely well written story with rare moments of complexity, and I can't help but draw parallels to Neil Gaiman's excellent Coraline, to which this book is a perfect sister.

((This is a review I did some months ago as practice. It was never published, although it was originally posted - along with a different version of the review - on SFFWorld. I have slightly reworded parts of it from the version posted there, as well.))
Posted by Kathryn at 4:25 PM