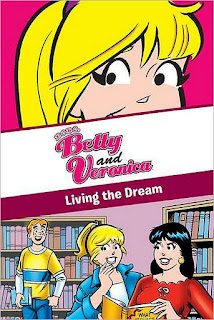 This year, one of the Penguin imprints (Grosset & Dunlap) released three Betty & Veronica novels - Living the Dream, We're With the Band and In Each Other's Shoes - which revolve around the titular characters from the Archie series of comics. Like aspects of the comics they revolve around both girls, their relationships and other aspects of their lives, all of which takes place in the town of Riverdale, a quintessential American town that seems to have barely changed in the seventy years that Archie has been published.

In Living the Dream, Betty and Veronica have just begun their summer vacation. Betty, as a responsible teenaged girl, has been trying to get a job for the summer for experience but also to earn enough money to replace her laptop. Veronica, coming from a background of money, has no such inclinations but quickly realises that experience in the fashion field would be vital for her dream career. Betty has spent the past few weeks applying for various jobs with only a single interview, and she's getting distraught. Whilst she loves spending time with her friends, she feels that she needs the experience and the money. Veronica, however, applies for just one job at a store called Belle Pink and gets it within days. It's not until Betty meets Archie at Pop's Chocklit Shoppe that she gets a job thanks to Georgette, the head waitress, overhearing and going to talk to Pop.

Both girls become quickly frustrated with aspects of their jobs, Betty with the attitudes of the customers and her frequent mistakes, and Veronica with the realisation that working in a clothes store isn't all about helping people directly and honestly. They both struggle through the first weeks, but whilst things begin to improve for Veronica, they only get worse for Betty...

I was quite tentative about reading these books, because children's lit - to me, as an adult - can sometimes feel too simplistic, and perhaps a little patronising. However, I never found that to be a problem with Living the Dream, as I felt it was well written and easy to follow but it didn't talk down to me. As you'd expect from a book for a lower age group, the descriptions are often quite simplistic and basic, but I found them to create quite a vivid picture of what the characters were wearing or doing at those moments in time. The interactions between characters also seemed very natural and in-keeping with both the characters but also the contemporary setting.

A lot of the characters from the comics make appearances, cameo or otherwise. Archie, the love interest for both of our protagonists, appears with some regularity and often with Jughead, his best friend. The very well received Kevin Keller, Archie Comics' first openly gay character, also makes a couple of appearances and I felt that the way he was treated was no different to how any other character would be, which to me is worth mentioning as it's such a rarity amongst LGBT characters. Together, these characters work just as well as they do in the comics, and I got a sense of the camaraderie that has been around for years.

If one looks a little deeper into the text, there seems to be some sort of reference to the current state of affairs. Jobs are hard to come by, the girls talk about how it's hard to get work without experience - I think whilst the depth might not be noticeable to younger readers, I'm sure any teenage or adult readers would quickly pick up on it and sympathise with the characters that much more. It helps connect the series to our "real" world, but also shows that for all its perpetual and arguably idealistic views towards teenagers and life, the world of Archie can still represent and show problems that we ourselves face.

However, I did feel the book had a little too much product placement in its attempts to seem relevant. One of the big appeals about Archie and the spin-off series is that it has a timeless quality to it - many of the stories could happen in 1950 or 1990 - and I was a little disappointed by the amount of direct references to our culture. Lady Gaga and Katy Perry are name-dropped (and to be honest, I'm quite surprised by that. Their personalities seem so different to the tone of Archie), and at one point we are told Kevin Keller has an iPod. I felt that Roberts could perhaps have used references from within the Archie world or catch-all terms, so for example Veronica could have listened to Josie and the Pussycats, and Kevin could have just had a music player.

In conclusion, I felt that Living the Dream was a very enjoyable read that should appeal to Archie fans of any age. It's quick, it's funny, it's light-hearted - It's a brilliant read. It was my first true foray into the Archie world, and I don't regret it one bit. I won't call it a must-read for anyone but Archie fans, though, as I feel the almost sugar-sweet tone and simplistic writing will grate with some.

I'll be reading and reviewing We're With the Band later this week...
Posted by Kathryn at 4:48 PM