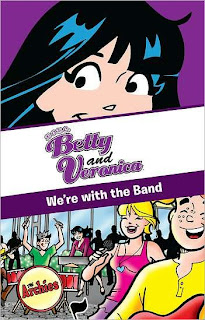 We're With the Band (Betty & Veronica) by Adrianne Ambrose

We're With the Band begins during the summer vacation, and The Archies are once again playing at Pop's Chocklit Shoppe. Betty and Veronica go outside to get some things before they start, but the bouncer doesn't let them back in. Thanks to good timing from Archie and Reggie, they get inside and soon the band start playing another popular set, but the seeds of discomfort begin to grow. Veronica feels jealous of Betty's freedom on stage and her proximity to Archie, the boy both girls have an on/off relationship with. After they've finished playing, Veronica proposes a somewhat selfish name change for the band, but it doesn't seem to go down too well. Reggie comments that neither girl really is part of the band, and that they are the "frosting" on the "cake" that is The Archies, causing an argument that results in both Betty and Veronica leaving the band and gives them the idea to start their own.

After some unsuccessful auditions, Nancy and a new girl by the name of Tina are chosen as the bassist and drummer for the band, the name of which is The Candy Hearts. They quickly begin to rehearse and perform shows, but with one member driving the band faster and harder, it's only a matter of time before something goes wrong...

As with Living the Dream, I felt We're With the Band was well-written and it didn't feel as if it was trying to be too simplistic or patronising. It was a smooth, clear and perhaps gentle read that was well paced and fairly vivid. I also noticed less product placement in this book, which to me was an improvement as the setting of Riverdale has really no need for constant pop-culture or real-world references. The way Betty and Veronica's sometimes-strained friendship was portrayed seemed very in-line with how teenage girls genuinely act, as did their reactions to each other and their friends. Kevin makes another few appearances in this book, and his sexuality is directly mentioned, and again I felt that it was done well and I must applaud the author for handling it as she did.

Whilst the themes didn't have quite the depth of the previous book that I read, they instead were much more personal and about the strength of friendship, but also about how we're not perfect. Veronica was quite selfish and deceptive at times, which itself was a factor in the initial split from The Archies, but Tina caused many more problems. As well as being selfish, she was too occupied on fame and fortune to realise that The Candy Hearts were about fun and friendship as well as showing The Archies up, not about being playing multiple gigs a week. Betty again seemed to get the short end of the straw as she found herself quickly worn out and upset by the problems within the band. It seemed to me that fame and money aren't more important than friends, and if you begin to lose the enjoyment of doing something like a band together, you should quit before it ruins a friendship.

I did have a few minor issues with the book, though. The biggest issue was the trigger for the split. Whilst I don't feel that it was intended to come across as it did, the way Reggie spoke about the girls seemed eerily reminiscent of the "because they are girls" argument used by some people to explain why females cannot/should not do certain things. I honestly do not think that was the intention, but it's how it came across to me as a reader. As I mentioned above, I also noticed that Veronica was almost overly selfish and deceptive, and that wasn't tackled with a resolution. It was basically brushed to one side and left unresolved, although the girls - obviously - did make up at the end.

We're With the Band was another fun read, although perhaps not as enjoyable as Living the Dream, and it should appeal to Archie fans of all ages and genders. It's funny, it's sad, and it's got a lot of honest representations of how band life can affect friends. Again, a must-read for Archie fans, but non-fans will still find some enjoyment here.
Posted by Kathryn at 4:16 PM